Where I work, one of the hats I wear is Admin Manager and so we just purchased a water dispenser and one of my colleagues, the head of HR, decides the water dispenser to be put in the kitchen and I thought it would be better in the main office. A few exchanged words, then she says she has made an executive decision. When she says that, my ego goes like ‘ But I am head of Admin’ and then she goes ‘And I am head of HR and Admin’ and I walk away. Then the moment I walk away, my conscience goes like ‘humility’  and the feeling that creeps in is one of embarrassment as to how I dealt with that situation and realized just how difficult a thing humility is. 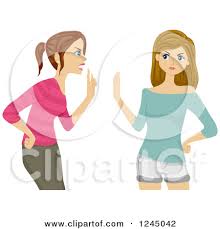 Now, you may think it a small matter but aren’t the small matters the ones that grow into big ones? And part of me is like ‘Go apologize for pulling the title game’ but my ego will not allow me to. And I try to justify it in my head that it will open a discussion I am not ready for and I decide to walk away, something I should have done the moment I heard, ‘I have made an executive decision’.

So now onto being objective. Why did I feel the need to answer my colleague back? And why did I quickly run to the title as my source of ‘power’? I guess more often than not it is easier to let what we do and our titles define us. I guess we do it without even knowing sometimes,it is like a default setting. Power games are always being played in many offices and we may fail to see a clear point because we are blocked with this self importance that we gain from our titles. I think I felt belittled and like I was being told that my opinions did not matter. That a decision had been made and that’s that. And so I felt the only way I could be heard was if I pulled the ‘rank’ card but then, thinking about it later, I realize I could have stepped out of the situation, not made it about me, and asked soberly of the reasons for it being taken to the kitchen as opposed to staying in the office. I could have chosen to not see it as a direct attack on me. I have a long way to go…lol

I realize that choosing humility will have to be a conscious decision, at least until when I master the art of it and it ends up coming naturally. I will always have to check myself. And I want to. I am committed to being the one who walks away and not the one who must have the last word. I want to be the one who listens first before speaking because that is why I have two ears and one mouth. I want to be the one who speaks kind words and not harsh words; I want my mouth to bless; not curse. And this not to achieve some status but because I know God recommends it and I know it will make my life much easier and better.

I went and reported my actions to my boss, just for accountability purposes. And I think God was also trying to show me it is not a one day thing and I have it all together. It will take some time, which is fine. I get an E for Effort…

Okay, that’s it for today!

Fresh from the oven